Easter Island in the neighborhood

We have a neighbor who is an artist, a painter and sculpturer, who has been busy lately with commissions in environmental art installations.  Most of his projects are onsite somewhere else, in another state or city or public park, but since this spring, he’s been busy erecting concrete forms in front of his house, and one by one, these concrete towers each with a rectangular window have sprung up along the street, sentry-like in formation. 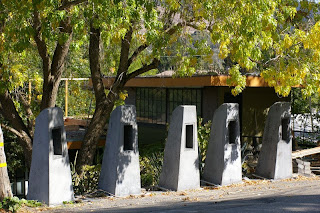 I think the towers are pretty cool; they have become a conversation piece as passersby stop and ask what the heck is going on.  Admittedly, there is a fortress like quality to the towers, so that some folks have assumed that our neighbor has decided to defend himself against … uh, the City’s code enforcement officers?  Perhaps the enforcers of our local Law and Order have tried, but apparently there is nothing in the code that says you can’t have concrete obelisks in front of your house.  So, there.

The mysterious obelisks are in fact, “view towers,” designed to direct your view to certain vistas.  The towers were commissioned for a park project where they would be installed at key locations, and each of the windows will eventually house an eye piece that will be trained on an object in the distance.   Or, so it has been explained to us.

The towers have been on the street for a while awaiting transit visas, I imagine, to be issued by the proper authorities.  In the meantime, we couldn’t resist, and one day, we placed some votives and oranges in the openings as an offering of sorts.  It was ignored for several days, and then, the voodoo curse was returned upon our front door, complete with bleached out skull and pentagram. yikes.

More recently, while my neighbor appeared to be away, I went to check out the “directed views” through the windows — and much like a photograph, I really enjoyed the different perspectives created by each framed view. 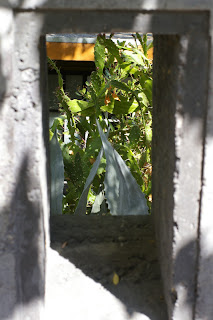 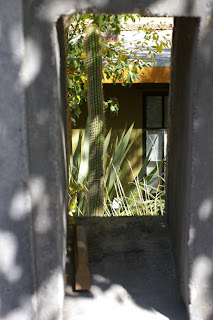 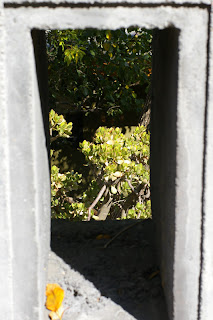 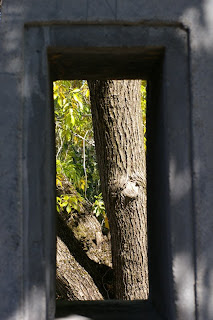 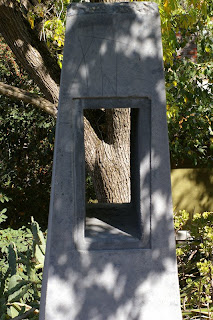 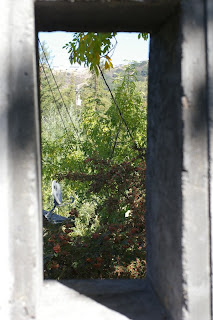