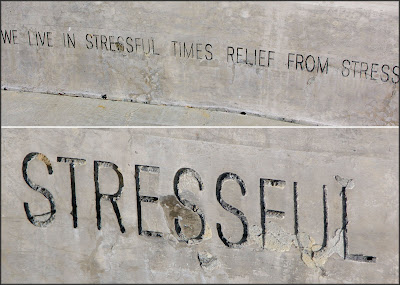 How interesting it is that the cracks and flaking are concentrated around the word “stress.” Makes me wonder if, somehow, this was all intentional. But I think … not.

After talking to some of my informants in the construction trade here and there, it seems that this unsightly finish came about because:
Although the low wall was freshly poured, for some reason, the outer surface was finished with a sack mix, applied in a 1/8″ or so thick layer. You can see some of the aggregate from the inside concrete layer in the photo where the letters have been routered. Obviously, the lettering was carved in after this thin plaster-like layer was applied. While additional care in the curing and application of the sack mix may have alleviated some of the flaking and mosaic cracks on the surface, such failure was probably inevitable given the waterfront location of the wall where it is constantly exposed to extremes in moisture. The better choice would have been to carve the letters in the wall without applying the additional layer of concrete. Of course, a more elegant and permanent solution would have been to use a granite stone or such, with finer workmanship as would have befit the occasion (this is a memorial tribute at the Rosie the Riveter Memorial Park in Richmond, Calif.)
Compare the understated but beautiful presentation of the message at the National AIDS Memorial Grove in Golden Gate Park, below.